Note: The latest version of this article is always available from the Writings page in HTML, PDF, ePub and AsciiDoc (source) format.

My interest in Evolutionary Algorithms started when I read On the Origin of Circuits over at DamnInteresting.com. I always wanted to try something like that out for myself, but never really found the time. Now I have, and I think I’ve found some interesting results.

Disclaimer: I know next to nothing about Evolutionary Algorithms. Everything you read in here is the product of my own imagination and tests. I may use the wrong algorithms, nomenclature, methodology and might just be getting very bad results. They are, however, interesting to me, and I do know something about evolution, so here it is anyway.

So, how does an Evolutionary Algorithm work? Why, the same as normal biological evolution, mostly! Very (very) simply said, organism consist of DNA, which determine their characteristics. When organisms reproduce, there is a chance their offspring’s DNA contains a mutation, which can lead to difference in characteristics. Sufficiently negative changes in offspring make that offspring less fit to survive, causing it, and the mutation, to die out eventually. Positive changes are passed on to future offspring. So through evolution an set of DNA naturally tends to grow towards its “goal”, which is ultimate fitness for its environment. Now this is not an entirely correct description, but for our purposes it is good enough.

There is nothing stopping us from using the same technique to evolve things towards goals set by a programmer. As can be seen from the Antenna example in the DamnInteresting article, this can sometimes even produce better things than engineers can come up with. In this post, I’m going to evolve the string “Hello, World!” from random garbage. The first example won’t be very interesting, but it demonstrates the concept rather well.

Our evolutionary algorithm will start with “jiKnp4bqpmAbp”, which we can view as the DNA of our “organism”. It will then randomly mutate some of the DNA, and judge the new mutated string’s fitness. But how do we determine fitness? This is probably the most difficult part of any evolutionary algorithm.

Lucky for us, there’s an easy way to do this with strings. All we have to do is take the value of each character in the mutated string, and see how much it differs from the same character in the target string. This is called the distance between two characters. We then add all those differences, which leads us to a single value which is the fitness of that string. A fitness of 0 is perfect, and means that both strings are exactly the same. A fitness of 1 means one of the characters is off by one. For instance, the strings “Hfllo” and “Hdllo” both have a fitness of one. The higher the fitness number, the less fit it actually is!

Edit: In the mutation algorithm below, I only mutate one character by one value at a time. It has been pointed out that, unless I actually allow for larger mutations, squaring the distance is largely pointless, since new mutations will always only differ by one value. At the time I wrote this fitness function, I had no idea how the rest of the algorithm would look like. It seemed like a good idea.

Now we need to introduce mutations into our string. This is rather easy. We simply pick a random character in the string, and either increment or decrease it by one, or leave it alone:

Time to tie the whole shabang together!

This should be easy enough to understand. For each iteration of the While-loop, we mutate the string and then calculate its fitness. If it is fitter then the original string (the parent), we make the child the new string. Otherwise, we throw it away. If the fitness is 0, we’re done!

Lets look at some output. I’m snipping out some intermediary output cause it’s not terribly interesting.

Not much progress so far. At generation 500 it’s still a load of nonsense:

Generation 1200, we start to see something that looks like “Hello, World!”:

It still takes a good 1500 generations more before we’re finally there:

Okay, so that worked. But… it was kinda lame. Nothing interesting to see, really, was there? That’s because our algorithm was a little too simplistic. Only one “organism” in the gene pool, only one character mutated at any time. We can do better than that, so let’s modify the program to make it more interesting.

We’re not going to touch our fitness function, since that works rather well. Instead, lets introduce a gene pool. Instead of having only one string, why not have a whole bunch or randomly generated strings and let them duke it out among themselves. That sounds a bit more real-life, doesn’t it?

This little snippet generates a gene pool with 20 random strings and their fitnesses. In an official implementation, the gene pool would be called the population. (Thanks, reddit!)

Now, lets modify our mutation function. Instead of mutating one single character, we feed it two parents, picked at random from the genepool, and it will mix their DNA together a bit. This is called crossover. It will also randomly mutate one character in the resulting DNA. It then returns the newly fabricated child, including its fitness.

We also need a routine to pick two random parents from the genepool. Now, we could just pick them completely random, but what you really want is for parents with a good fitness to have a better chance of offspring. This is called elitism If we sort the genepool list by fitness, we can use a uniform product distribution to make sure that parents with better fitness get chosen more often. 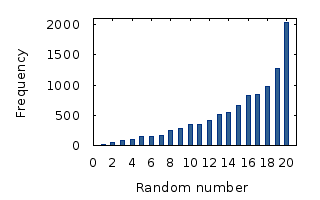 So our random parent picker will do just that. We select two random real numbers between 0 and 1, multiple those two random numbers and then scale the result up to our poolsize by multiplying the result with the size of the pool. We return that parent from the pool.

There! Now it’s time for our main loop

For each iteration of the While True loop, we first sort the genepool by fitness so that the most fit parents are at the top. We check to see if the fittest happens to be the target string we're looking for. If so, we stop the loop.

Then we select two parents from the genepool using the uniform product distribution so that fitter parents are chosen more often. We create a bastard mutated child that will mix both parents' DNA together and introduce a little mutation. If the new child is more fit than the worst in the genepool, it will replace that degenerate one in the genepool. In the next iteration, the pool is sorted again on fitness so that the new child takes its rightful place.

Now it's time to run this puppy and see what it does. Again, I snip out some of the less interesting stuff.

Here's the genepool in the beginning. The first number is the generation (the number of times the While-loop has run), the second number the fitness and the third column is the DNA for that entry in the genepool.

One big random jumbled mess. Note the ones I've emphasized. These are the parents that were selected for the new child in the next generation. Lets see how it looks after one generation:

Two random parents from the previous generation have their DNA mixed, and have generated an offspring (the bold one) which is better then both of them. It comes in second with a fitness of 8742, while its parents only had fitness of 9284 and 16588. Lets skip ahead a bit and look at the 6th generation:

As you can see, the "SQf" has reproduced again with success, and there are now four variants of it in the genepool. We also note the "kWw#", which there are two identical ones of. This can happen when the entire DNA of one parent is copied and no mutation occurs. In our mutate function, we use the first parent's DNA as a base and then randomly overlay some of the seconds parent's DNA. This can anything from the entire second parent's DNA, or nothing at all. But generally, the chance is higher that the first parent's DNA survives largely in tact.

The next interesting generation is 13:

Wow! "SQf" has been really busy and now almost rules the genepool. "iSx" is second and third, but has lost its number one position to the "RQf" variant of "SQf". "RQf" was introduced in the 12th generation as a child of an "iSx" and "SQf" variant. We see that "kWv" has been knocked almost to the end of the list by more fit candidates. It is very obvious that this pool is no longer random. Patterns are starting to emerge all over it.

By the time we reach generation 40:

The genepool is now almost entirely dominated by the "RQf" variants. Forms of its original parents "SQf" and "iSx" can still be found here and there, although "iSx" is almost entire gone from the pool. An interesting thing is that we can see combinations of letters (bold) that keep reappearing. These are almost like actual genes! Combinations of DNA that work well together and therefor stay in the genepool in that combination. It takes lots of generations to make variants of these genes that are more fit then previous versions.

The next milestone is found in the 67th generation:

This marks the first generation where there are no other variations then the RQS one. But immediately, we see the next generation in which a new number one is found:

By the 96th generation, QQS has taken over the top:

This is where the race gets boring. Every now and then a new, better, mutation will arise and take over the genepool. Change is slow though, and no big surprised are left. The candidates slowly but surely mutate until the reach something resembling the "Hello, World!" we are looking for in generation 1600:

It takes almost another half-thousand generation to get to the final target:

Here are the program so you can download them and play with it a bit (ignore the SSL warning; it's a self-signed certificate):

Update: It has rightly been pointed out that are much more efficient methods of this algorithm. Please keep in mind that I had absolutely no idea what I was doing. :-D I'm surprised I got so close to how one would properly implement an Evolutionary Algorithm.

Also, here are some more interesting statistics. I modified the mutation function a number of times, and these are the results:

You can also read the
Reddit discussion and the Hacker News discussion for some nice insights. One of the most interesting comments mentions:

FWIW, for this problem, at least the way the OP set it up, the "naive" algorithm is actually a very good way to go - when I increase the population size to 20, and set the mutation/selection/crossover policies OP used, I find that the average number of fitness checks required to hit "Hello, World" (about 3510) is actually higher than the number in the naive version (in the neighborhood of 3k, usually a bit under). Also, the real time taken is larger. Which means that adding "genetic" to the algorithm has actually hurt us...
In fact, even with my full GA codebase in hand (not a substantial one, I wrote it in response to this post, but it's more flexible than the OP's), I couldn't find any situation where having a population size more than a few members helped - single member mutation (which is accepted/rejected if better/worse) always won. This is a good indication that this type of problem is vastly better suited to gradient descent than it is to a genetic algorithm.