As happens with all media, once corporations join in because there is money to be made, things quickly devolve into a flaming heap of shit. The internet is no exception to this rule. With the coming of Javascript and DHTML in the late 90’s, ads soon started appearing on the web. Not long after, pop-ups – either with or without ads – became a common sighting. This set off a back-and-forth war of browsers trying to block annoyances such as pop-ups and advertisers coming up with innovative ways to annoy the crap out of everybody. What started with still images of ads, much like you’d have on traditional paper, soon changed into a moving, blinking, automatically playing audio and video crapfest.

Because the basics underlying the web are insecure-by-design, it is possible for browsers to make requests to any website in the world from any website you decide to visit. This of course was quickly picked up by content publishers, the media and advertisers alike, to track your every move on the internet in order to shove more lukewarm shit down the throats of the average consumer.

The rise and fall of ad blockers

The answer to this came in the form of Ad blockers: separate programs or extensions you install in your browser. They have a predefined list of ad domains that they’ll block from loading. Naturally this upset the media and advertisers, some of whom equate it with stealing. One has to wonder if ignoring ads in the newspaper is also considered stealing. At any rate, it’s hard to be sympathetic with the poor thirsty vampires in the advertising industry. They’ve shown again and again that they can’t self-regulate their own actions.  They’ll go through great lengths to annoying you into buying their crap and violating your privacy in the most horrible ways, all for a few extra eyeballs *.

Unfortunately, much like how the zombies refuse to stay dead once slain, so do the annoying features on the web. For the past few years the media, content producers, advertisers and basically everybody else have decided to redouble their efforts in the Annoyance Wars with such things as Javascript / HTML5 pop-ups begging to sign up to their newsletters, automatically playing HTML5 videos, auto-loading of (or worse: redirecting to) the next article, detection of adblockers, bitcoin mining Javascript software running in the background when you visit a site, ever increasing and deeper tracking, super cookies, tracking pixels, the use of CDNs, etc.

For example, CNN’s site loads resources from a staggering 61 domains. That’s 61 places that can track you. 30 of those are known to track you and include Facebook, Google, a variety of specialized trackers, ad agencies, etc. It tries to run over 40 scripts and tries to place 8 cookies. And this is only from allowing scripts! I did not allow cross-site background requests or any of the blocked domains. I’m sure if I unblocked those, there would be much, much more. 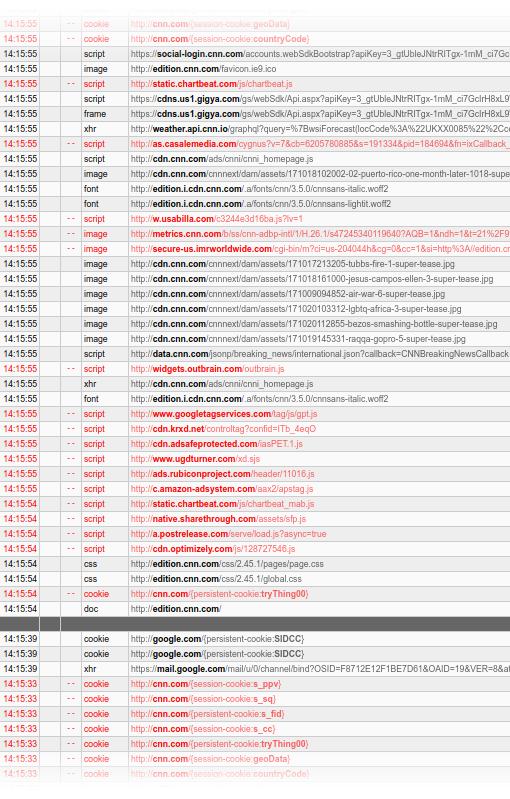 To top it all off, advertisers have decided to go to the root of the problem, and have simply bought most ad blockers. These were then modified to let through certain “approved” ads. The sales pitch they give us is that they’ll only allow nonintrusive ads. Kinda like a fifty-times convicted felon telling the parole board that he’ll truly be good this time. In some cases they’ve even built tracking software directly in the ad blockers themselves. In other cases they’re basically extorting money from websites in exchange for letting their ads through.

Bringing out the big guns

So… our ad blockers are being taken over by the enemy. Our browsers are highly insecure by default. Every site can send and retrieve data from any place on the web. Browsers can use our cameras, microphones and GPUs. The most recent addition is the ability to show notifications on our desktops. A feature that, surprise surprise, was quickly picked up by sites to shove more of their crap in our faces.  Things are only going to get worse as browsers get more and more access to our PCs. The media has shown that they don’t give a rats ass about your privacy or rights as long as there’s a few cents to make. The world’s most-used browser is built by a company that lives off advertising. Have we lost the war? Do we just resign ourselves to the fact that we’ll be tracked, spied upon, lied to, taken advantage of and spoon-fed advertisements like obedient little consumers every time we open a webpage?

Umatrix is like a firewall for your browser. It stops web pages from doing anything. They can’t set cookies, they can’t load CSS or images. They can’t run scripts, use iframes or send data to themselves or to other sites. Umatrix blocks everything. Umatrix is what browsers should be doing by default. Ad blockers are just not enough. They only block ads and then only the ones they know about. To get any decent kind of protection of your privacy, you always needed at least an Adblocker, a privacy blocker such as Privacy Badger and a script blocker such as Noscript. Umatrix replaces all of those, and does a better job at it too.

When you just start out using umatrix, you’ll find that many sites don’t work properly. On the other hand, many sites work a lot better. If you take a little time to unblock things so that your favorite sites work again (and save those changes), you’ll notice within a few hours that it’s not so bad. Umatrix is still for technical users and even those might find it too much of a chore. I find it worth the small effort to unblock things if that means my privacy stays intact. And more importantly, I’m never annoyed anymore by ads or pop-ups, plus I’m much less likely to accidentally run some malicious javascript.

This is what a CNN article looks like with Umatrix enabled and only allows first-party (*.cnn.com) CSS and images, which I have set as the default: 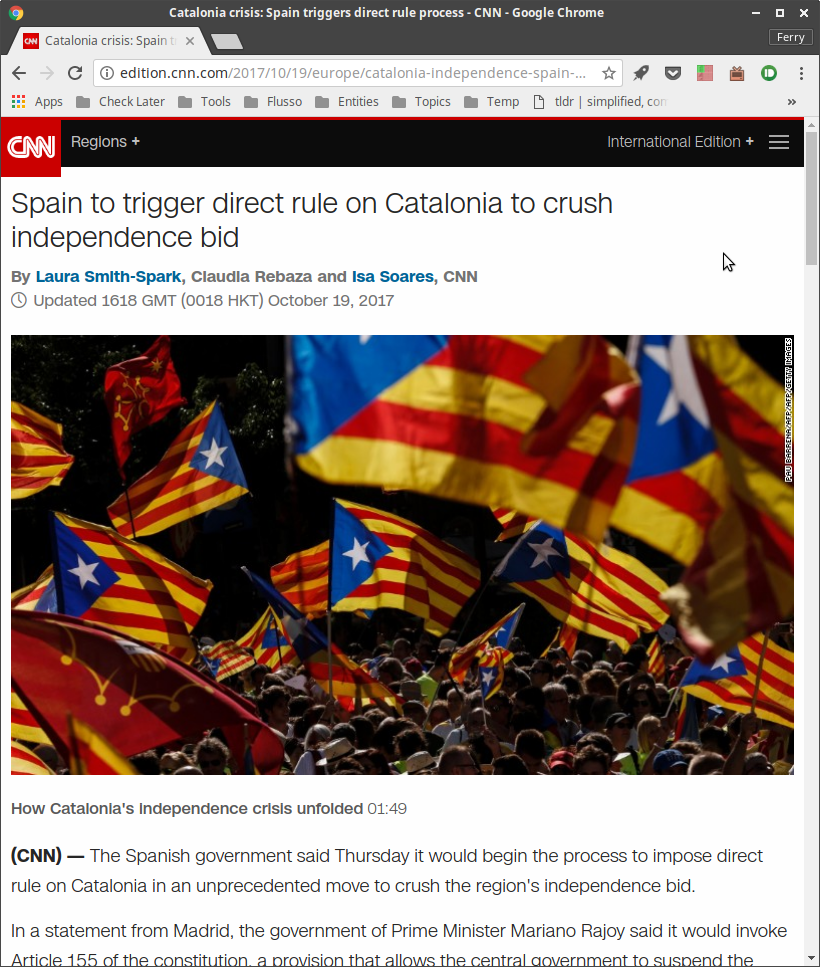 Look at that beauty. It’s clean. It loads super fast. It cannnot track me. It’s free of ads, pop-ups, auto playing videos, scripts and cookies. Remember, this didn’t take any manual unblocking. This is just what it looks like out of the box with umatrix.

Get it, install it, love it

Get it for Firefox, Chrome or Opera. Umatrix is Open Source, so it cannot be bought out by ad agencies.

Read my tutorial to get started with umatrix, as the learning curve is fairly steep.

Thanks for reading and safe browsing!

*) Someone will probably bring up the whole “but content creators should / need / deserve money too!” argument again. I’m not interested in discussions about that. They’ve had the chance to behave, and they’ve misbehaved time and time again. At some point, you don’t trust the pathological liars anymore. No content creator switched to a more decent ad provider that doesn’t fuck its customers over. The blame is on them, not on the people blocking their tracking, spying, attention-grabbing shit. Don’t want me looking at your content for free? Put up a paywall. People won’t come to your site anymore if you did that? Then maybe your content wasn’t worth money in the first place.